New footage has emerged showing the moments before Jacob Blake was shot in front of his children. The video captures Blake engaged in a struggle with at least two Kenosha police officers on the right side of his gray SUV wrestling with them on Sunday, TMZ reported.

The angle depicts Blake wrestling with police he then stands up and walks around the side of his car and opens the door before being fired upon at point-blank range. While the video is unclear and blurry, you can still clearly see a struggle between Blake and the officers. There are also screams heard with a woman appearing to say “drop it.”

Officers have claimed that Blake had a knife. However, the witness who filmed the video has disputed that claim stating the situation was what made him start to film.

The man identified as Ray said he began filming shortly after an argument between two women unfolded.

“He pulled up in his truck and he told his son to get in the car,” said Ray. “Like, he didn’t want nothing to do with the drama.”

The witness stepped away to use the bathroom, according to Fox News then a few minutes later he returned and started filming from his cell phone.

“I came back to the window and I seen three officers wrestling him,” said Ray. “When they were wrestling him, they had him in a headlock. One officer had him in a headlock. He was holding his arms. Another officer was punching him in his ribs. They got him on the car, and the female on the car and the female officer tased. After she tased him, they wrestled him more to the back of the car.”

Although, it’s notable for the reader that upon reviewing the original tape and slowing it down, there is a frame from the video that shows an object in Blakes’ hand, which could be a knife. But honestly, we don’t know what this object is that he’s holding. 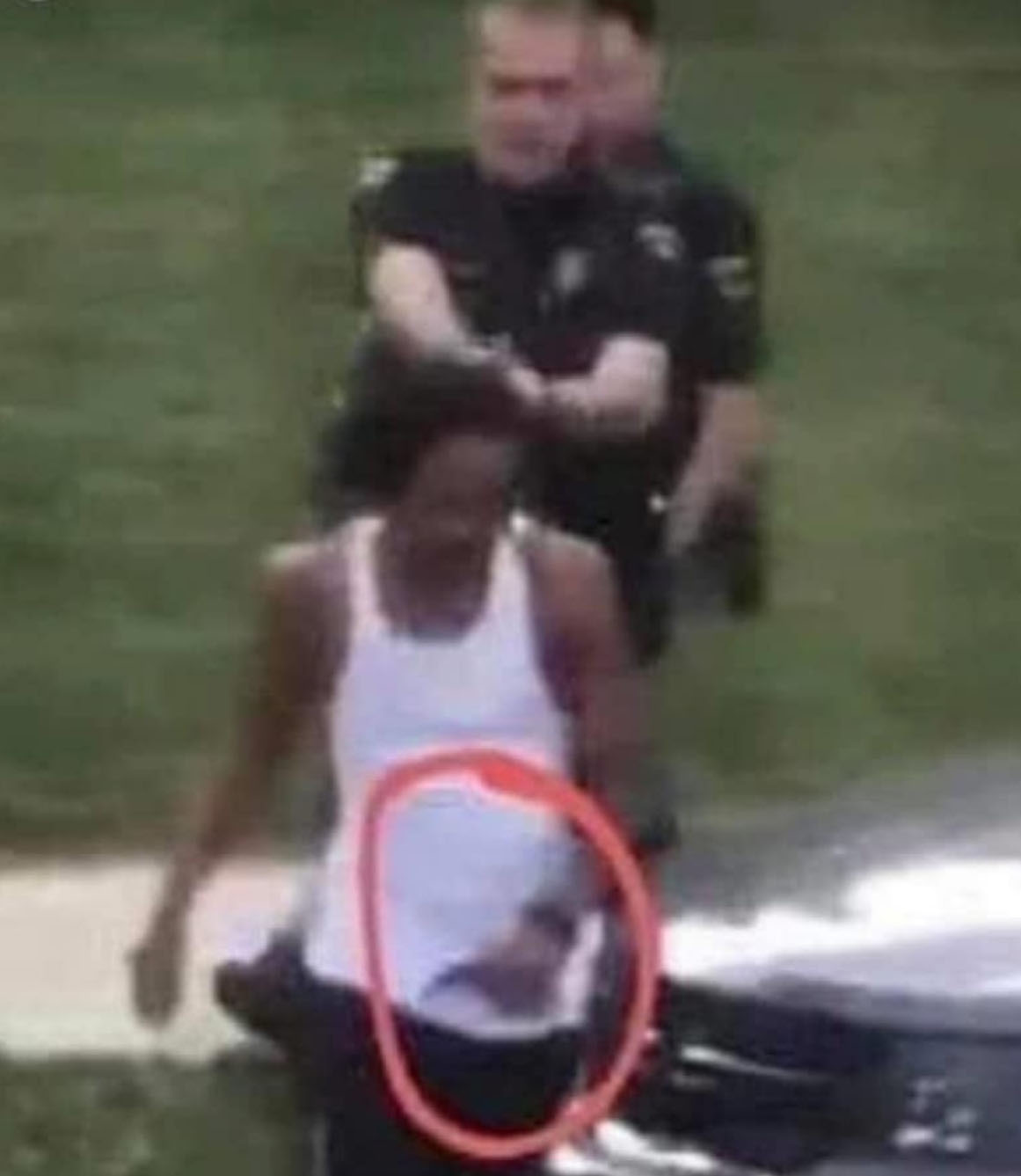 Within hours after the shooting of Blake, Kenosha heated up as rioters began looting and committing acts of arson all over the city. Blake is alive and receiving treatment at a local hospital. However, it was announced today that the man may be paralyzed completely from the waist down, meaning he may never walk again.

Evers condemned the incident, stating that while not all details were known, “what we know for certain is that Blake is not the first Black man or person to have been shot or injured or mercilessly killed at the hands of individuals in law enforcement in our state or our country.”

Pete Deates the President of the Kenosha police union stated that the governor’s statement was irresponsible. “As always, the video currently circulating does not capture all the intricacies of a highly dynamic incident.”

Authorities have enacted a curfew which was put into effect at 7 a.m. on Monday morning. The Wisconsin Department of Justice is investigating the police-involved shooting according to a report by the New York Times.  All officers involved were placed on administrative leave and the DOJ “aims to provide a report of the incident to the prosecutor within 30 days” to determine whether to file any charges.

The full official details about what led up to the shooting are unknown, but it appears Blake was already involved in some sort of altercation with police. Reports say witnesses claimed he was breaking up a fight between two females.

A friend of the family Julia Jackson is running a GoFundMe.com page, where the funds are meant for medical bills and legal representation for Blake. On Tuesday, the page has thus far reached over $1 million dollars with a goal of $2 million by the end of the campaign.

You can watch the full video below courtesy of ABC News 7 on Youtube.

Kenosha Set Ablaze For The Second Night, Buildings And Cars Set On Fire

During a live news broadcast of the protests in Salt Like City this weekend, a police officer…
byMark Horowitz
7K shares
7K
0

In a video to recently surface from the Amazon, an indigenous woman can be seen fleeing the…
byMark Horowitz

A descendant of Thomas Jefferson wants the Washington, DC, memorial to be removed because the Founding Father…
byAlex Baldridge

On Friday, President Donald Trump said that the US government would not deliver a coronavirus vaccine to…
byMark Horowitz
168 shares
168
0

Protesters are back in the street in Hong Kong, after the passage of a new security bill…
byMark Horowitz

Senate Majority Leader Mitch McConnell had his home vandalized this week, after blocking the vote to increase…
byJohn Vibes
211 shares
211
0

Alex Trebek, the beloved long-time host of the popular game show “Jeopardy!” has passed away after a…
byMark Horowitz
264 shares
264
0

Hurricane Dorian strengthened as it passed near the U.S. Virgin Islands, Puerto Rico and the Bahamas this…
byMark Horowitz

Brian Basham, a close family friend of Ghislaine Maxwell, has recently said that he is determined to…
byJohn Vibes
1 share
1
0

John McAfee’s life was filled with controversy and mystery, and his death has been no different. The…
byMark Horowitz
2K shares
2K
0

A woman named Miriam Rodríguez Martínez hunted down members of a drug carteI in Mexico, in search…
byMark Horowitz
936 shares
936
0

In a new interview, the popular progressive Democrat Alexandria Ocasio-Cortez has told the New York Times that…
byJohn Vibes
873 shares
873
0