Incredible footage is spreading around the internet, showing a pair of motorcyclists speed by a huge tiger that is chasing the bike down.

The video was taken on a road near the Nagarhole National Park, which is a large wildlife reserve in the southern part of Karnataka, in India.

As the motorcycle is riding down the road, the tiger sprinted out of the woods and began catching up to the bike fast. Experts suggest that the animal can reach speeds of around 40mph on foot.

Luckily, the bike managed to speed out of reach, and the tiger ran off into the woods. 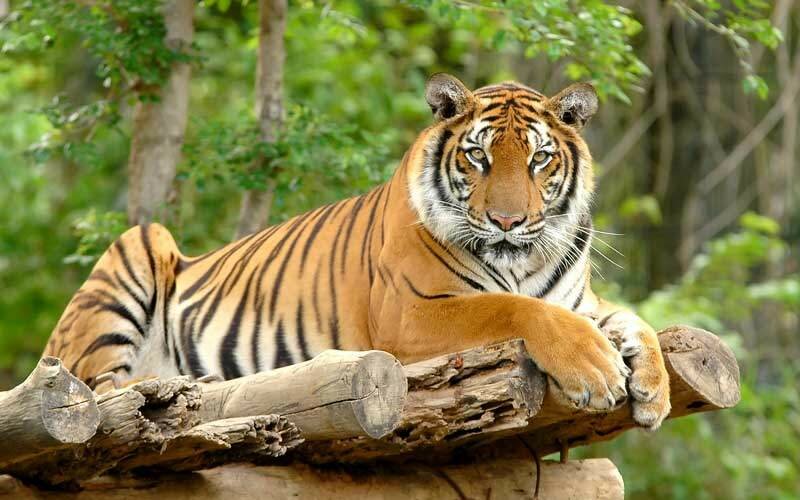 It is suspected that the species is a Bengal tiger, which is currently listed as an endangered species on the IUCN red list.

It does not seem like the motorists were ready for what was about to happen, but since the camera panned in the direction of the animal, it is likely that they spotted it as they were approaching the area.

It is not clear what type of camera managed to get the shot. It seems that for such a great shot, the passenger would need to be wearing a go pro. Otherwise, it would have been extremely difficult to keep the camera on the tiger while it was in pursuit.

A Tiger is seen chasing a bike in Muthanga Wildlife Safari in Wayanad in Kerala.Is this how the Tiger Parks are managed in India?

72 tigers are currently living at Nagarhole National Park and they are not shy about protecting their territory.

Tigers at these parks can certainly be very dangerous and treated with caution. 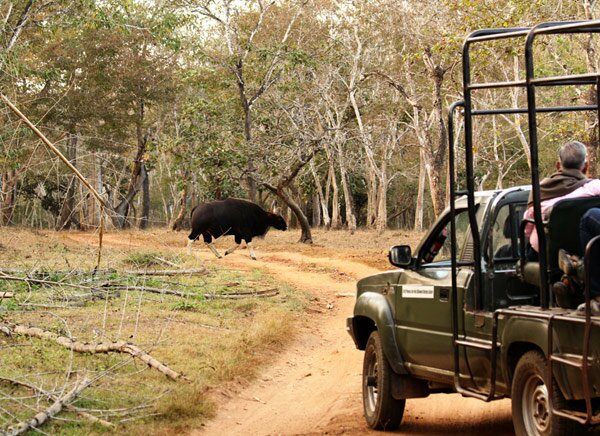 This year, one of the tigers at Nagarhole National Park killed three people before it was tranquilized by park authorities. Just a few years ago, in 2015, two farmers were also killed on along the park’s edge.

Nagarhole has been a National Park since 1983 and, is known as one of the last remaining and best protected sanctuaries for endangered species like elephants and tigers.

Drew Doggett, an artist, and photographer from South Carolina in the United States, travels the world to find the best shots of people, animals, scenery and anything interesting that he can find. During a recent trip to Iceland, he managed to capture some incredible photos of Icelandic horses in their natural habitat. In a series that he titled “In the Realm of Legends,” Doggett showed some of his best shots of the animals. Luckily, he shared many of these shots to his Instagram page.

The Icelandic Horse is legendary and is considered to be one of the oldest horse breeds in the world.

According to historians, the horses were brought to Iceland by the Vikings in the 9th and 10th centuries, and because Iceland is such a remote island nation, these horses have not come into contact with any other breeds for nearly 1000 years. There are also strict rules in place in Iceland to prevent any other horse breeds from entering the island. Horses are allowed to be exported from the island, but in that case, they are never able to return.

The breed comes in many coat colors, including chestnut, dun, bay, black, gray, palomino, pinto and roan, but the ones that were captured in Doggett’s photographs were all white. There are over 100 names for various colors and color patterns in the Icelandic language.

Members of the breed are not usually ridden until they are four years old, and structural development is not complete until age seven. Their most productive years are between eight and eighteen, although they retain their strength and stamina into their twenties.

Tourists in Kazakhstan beat a seal unconscious just so they could take some photos of their children posing with it. The incident was recorded at a beach near the coastal village of Kuryk, which is located on the eastern shore of the Caspian Sea.

In the video, a group of people can be seen surrounding the seal with sticks and large rocks as it began to come close to the shore. Meanwhile, bystanders began to gather around and record what was happening, but none of them decided to intervene.

“They beat the seal up until it passed out. Then they pulled it out of the water so that children could take pictures and have fun. After that, they threw the motionless body back into the sea. I don’t know if it survived,” an unnamed witness explained to local media.

Even more disturbing is the fact that this is not an isolated incident. This video hit the web just days after a similar incident on a beach in the city of Aktau, which is just about 43 miles from Kuryk. In a video of that incident, beachgoers can be seen throwing large rocks at a baby seal as it approached them.

The video was shared on Instagram by Kazakh model Yevgeniya Mukasheva who wrote:

“Do people really have a complete lack of brains? How could you throw stones at the defenseless pup and laugh? Have you lost your mind? When will we already understand that it is necessary to value and care for every creature on the planet? What more pain do we need to strike so that we understand that mercy and compassion must be in our minds?”

The actions have been widely condemned by animal rights activists and authorities throughout Asia. “The way people acted in the video is outrageous and wild,” said Saken Dildakhmet, a spokesperson for Kazakhstan’s Ministry of Ecology, Geology and Natural Resources.

“Such an attitude can cause great damage to the fauna of the Caspian Sea and adversely affect the behavior of these animals who may become aggressive and attack people. We ask you to show respect to nature. The seal in the clip is young and playful. The seals are mostly very friendly and curious marine mammals. We should admire them,” Dildakhmet added.

Authorities are now searching for suspects in both of the cases. If anyone is caught, they could face a maximum sentence of two years in prison.

The Caspian seal is one of the smallest members of the earless seal family and is unique because it is found exclusively in the brackish Caspian Sea. They are found along the shorelines and also on the many rocky islands and floating blocks of ice that dot the Caspian Sea. In winter, and cooler parts of the spring and autumn season, these marine mammals populate the Northern Caspian Sea. As the ice melts in the warmer season, they can be found on the mouths of the Volga and Ural Rivers, as well as the southern latitudes of the Caspian where cooler waters can be found due to greater depth.

Evidence suggests the seals are descended from Arctic ringed seals that reached the area from the north during an earlier part of the Quaternary period and became isolated in the landlocked Caspian Sea when continental ice sheets melted. The Caspian seal is endemic to the Caspian Sea and its population has fallen drastically, by over 90 percent since the beginning of the 20th Century, according to regional conservationist group Caspian Seal Project.

Due to increased industrial production in the area, pollution has had an effect on the survival of the Caspian seal. From 1998 to 2000, the concentration of zinc and iron increased dramatically in the tissue of dead, diseased seals. This suggests these elements are causative agents in compromising the Caspian seal’s immune system.

In 2008, the International Union for Conservation of Nature (IUCN) officially announced that the Caspian seal was “Endangered” and at risk of extinction due to economic activities around the Caspian Sea and coastal development in the Caspian littoral states of Azerbaijan, Iran, Kazakhstan, Russia and Turkmenistan.

Deforestation in India has led to animals being forced to cross paths with humans more often, and in many cases, these encounters can be ugly, and sometimes even deadly for the elephants.

In one Bishnupur village in India, elephants have begun wandering through the community and the residents became hostile. Elephants can easily damage property or even hurt people in small villages like this, so people aren’t really thinking about the wellbeing of the animal. Elephants were estimated to have caused millions of dollars of property damage to large agricultural operations, and they are often killed in retaliation. In some photos, residents of the village can be seen tossing firebombs at a mother elephant and her calf to keep them wandering through their crops, causing the panicked animals to flee across the road.

These photos were captured by photographer Biplab Hazra, who is hoping to raise awareness about the struggles that elephants are facing amidst ongoing deforestation. “This happens because the villagers have to save their crops. There are many elephant corridors in human habitations. I’m trying to show this and spread my photos to increase public awareness on the matter,” Hazra says.

According to government data, 14,000sq km of forests were cleared to accommodate 23,716 industrial projects across India over the last 30 years. Deforestation in the region is mainly caused by environmental degradation by farmers, ranches, loggers, and plantation corporations. In 2009, India ranked 10th worldwide in the amount of forest loss, where world annual deforestation is estimated at 13.7 million hectares each year. This deforestation pushes many animals from their homes and into danger.

Indian elephants may spend up to 19 hours a day feeding and they can produce about 220 pounds of dung per day while wandering over an area that can cover up to 125 square miles. This helps to disperse germinating seeds, so even though they can sometimes be destructive to villages, humans still like to keep them around. They feed mainly on grasses, but large amounts of tree bark, roots, leaves and small stems are also eaten. Cultivated crops such as bananas, rice and sugarcane are favored foods as well. Since they need to drink at least once a day, these elephants are always close to a source of fresh water.

Elephants are not only a cultural icon in India and throughout Asia, but they also help to keep the forest and grassland habitats healthy.

According to the 2017 census of elephants in India, the country is home to 27,312 elephants, which accounts for 55% of the total world elephant population. The elephant population in Assam has increased from 5,246 in 2002 to 5,719 in 2017, but now also faces serious challenges due to deforestation. These animals were once much more common throughout Africa and Asia, but elephants have sadly declined significantly during the 20th century, largely due to the illegal ivory trade. Even though some populations are now stable and growing in some select areas, poaching, habitat destruction and conflicts with humans like those depicted in these photos continue to threaten the species, and many others.