SeaBubbles are a new revolutionary watercraft that use hydrofoil technology in combination with fly-by-wire technology from the aircraft industry so the prototypes can float above the water at a speed of 12 km/h. The new technology looks like something you would see out of the Jetsons but it’s real and operational.

Mashable recently highlighted Seabubbles in a post on Twitter showcasing the flying taxi zooming across the water.

These water taxis could make moving around cities easier pic.twitter.com/kyTMzMnRta

Seabubbles are 100% electric and there are no CO2 or soot emissions from them. They are also charged just as an electric car is and the ports available charge the ships. As an added bonus, since the ship floats above the water it means that passengers are not affected by any waves or seasickness, unlike typical boats.

There is also a cost savings that comes from an all-electric design, which means the boat charges at a power station — preferably one that’s solar-charged.

Seabubbles are still new and have not fully rolled out yet, but we may see that change and the flying taxi could be coming to your city soon. Currently, Seabubbles are operating in —Lake Geneva in Switzerland, Seine in Paris, the Mediterranean Sea, and Miami to name a few places.

Founded only three years ago in Paris, the idea for SeaBubbles was dreamed up by Alain Thébault, a sailor who previously designed and piloted the Hydroptère, an experimental hydrofoil vehicle, using a similar system that lifts the boat in order to reduce drag. That boat went on to break the world record for sailing speed twice, at 50.17 knots. 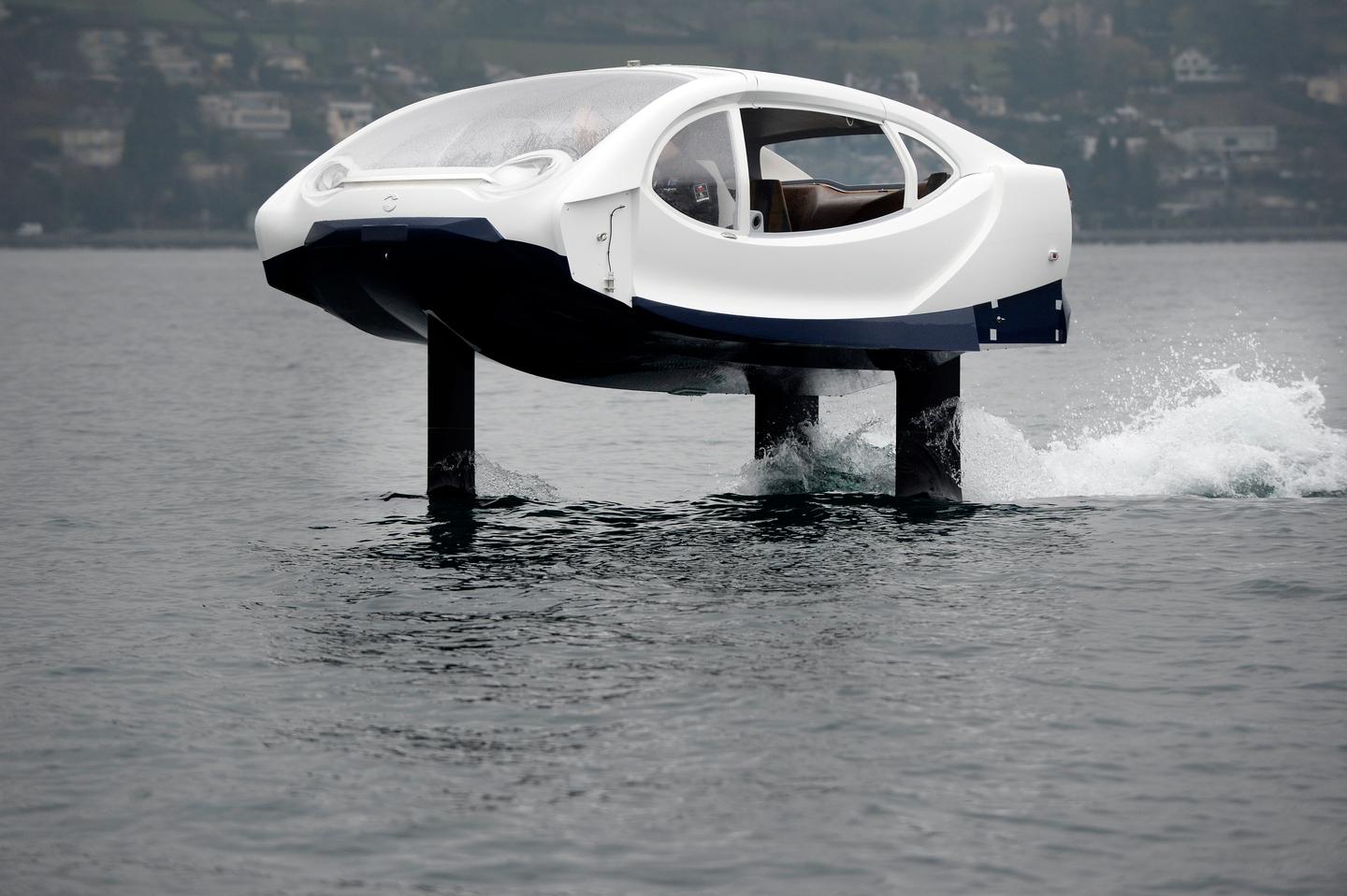 SeaBubbles can provide a way for cities to reduce traffic congestion and help the environment by taking advantage of the area’s waterways to move people around in fast water taxis across rivers, lakes and other large bodies of water.

The company experimented with all sorts of designs and models before settling on its first SeaBubbles prototype water taxi: a smaller, 4.5-meter version that seats four passengers in addition to the pilot or captain which travels at speed of 16 knots and a top speed of 20 knots. However, the technology itself is scalable to larger boats or even ferries in the future, Tech Crunch reported.

Seabubbles states though that its production machines will be faster, with bigger batteries, longer range and 35-minute fast charge time, NewAtlas reported.

According to SeaBubbles’ U.S. partner, Daniel Berrebi, whose company Baja Ferries has made a “small” investment in SeaBubbles, even larger boats like his could eventually benefit from the technology.

We were promised flying cars in the year 2020 but instead, we got hover boats which are still pretty cool. Check out a video below.

James Hobson, a Canadian engineer and YouTuber based has created a filly functional lightsaber using plasma that can…
byJohn Vibes
1K shares
1K
0

Nissan has released a new concept for a possible future model of the TITAN series. This concept is…
byMark Horowitz

Table of Contents The Capabilities Of The Alaka’i SkaiHydrogen: An Expensive Fuel SourceThe Future of SkaiPrevious Developments In…
bySusan Claire

Update: *Billionaire Bill Gates has not commissioned a hydrogen-powered superyacht from designer Sinot, the firm has told the…
byMark Horowitz
3K shares
3K
0

You may not have noticed, but it turns out that there was a massive massive data breach at…
byMichelle Williams

65-year-old inventor Christian Poincheval, from the French village of Gesvres, is becoming a household name around the world…
byJP Steinberg

The new Lamborghini Sian was revealed last year at the 2019 Frankfurt motor show. This car is Lamborghini‘s…
byMark Horowitz

An architecture firm based in Saint Petersburg, Russia has developed plans for a “zombie-proof bunker” house that is…
bySusan Claire